Lost Dog: Does Not Answer to "Pablo" 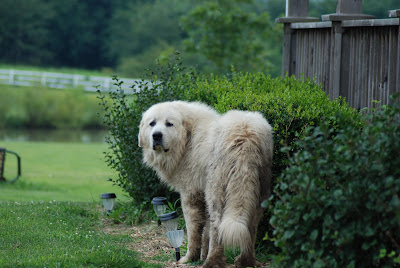 We have five dogs at our house, which according to the Cass County, Missouri Zoning Ordinance classifies our family as bona fide idiots. I decided to research this issue because I had heard that many counties define a residential structure with over five “domesticated” animals as a “kennel.” In our part of the world, a kennel is code for “puppy mill,” which is double-secret code for “redneck-criminal-Michael Vick-lovin’-lowlife.” And even in a state that only recently repealed cockfighting, no one wants to be identified with the Philadelphia Eagles.

But as it turns out, in Cass County you can have as many dogs as you like, but unfortunately you must like the dogs you have. I was forced to wonder about the five dog threshold when a large Great Pyrenees showed up on our property a few weeks ago. For the sake of brevity, and to ensure you don’t further question our already suspect judgment, I won’t go into how we accumulated even four dogs in the first place. Suffice it to say that we succumbed to a series of tears, pleas, and paternity suits and our lives subsequently spiraled out of control. So enter the Great Pyrenees, who despite our best efforts refused to go home. After his arrival I called the pound, our veterinarian, a local dog groomer and scoured the newspaper for “Lost Dog” ads. These efforts turned up no leads on a missing Great Pyrenees. This writing represents our first effort to “go public” in our attempt to get rid of h—I mean find his rightful owner.

You see, dogs come and go out here in the country, but unfortunately around our house they mostly come and stay. I think they see the lavish smorgasbord of dog food which is dumped across the sidewalk each morning (or if not each morning at least whenever we think about it). This spread is often accompanied by some sort of table scrap and the result is something that resembles a Carnival Cruise Line buffet. This may not be that impressive if you’re a suburban dog, but out here it signals the end of treeing squirrels and chasing rabbits for sustenance. It also signals the unlikelihood that you will get shot doing any of the above. You see dogs are attracted to our place because it resembles a canine Club Med. As a dog around our house, you are not expected to do any work to speak of. You’re really not even expected to move or wake up if a band of robbers comes around. The next thing we’ll be doing is buying them robes and lining them up for spa treatments.

Usually these dog visits run their course but not so with our Great Pyrenees friend that my oldest son eventually named “Pablo.” We’re not really sure why my son named him Pablo. So far as I can tell, my son doesn’t have strong convictions on the immigration issue. I hope this doesn’t sound prejudiced, but Pablo doesn’t really look like he would come from south of the border. He looks more like a polar bear, and accordingly like he might have come from a cold climate—maybe Alaska or Scandinavia or Des Moines. Perhaps he should have been named Nome or Duluth or Al Franken.

But Pablo he is and the name has stuck. Pablo himself doesn’t get it though. He stares blankly at us when we call him and bid him to come to his concrete buffet. He blinks, wags his tail a bit, and offers a slight smile when we say “here Pablo.” When we persist in calling him by his new name he turns his head and looks around, seemingly wondering when this Pablo fellow is going to emerge from the dense underbrush. He thinks he’s caught in some sort of dog version of “To Tell the Truth.” TV Announcer: “Will the real Pablo the Pyrenees please play dead?”

We’ll persist in our efforts to find Pablo’s rightful owner, primarily because during this global economic meltdown I can’t start buying Frontline in 55 gallon drums. In the meantime we’ll be relieved that we won’t be the target of any zoning investigation. And, we’ll rest easy knowing that we could add 5, 10, or 27 more dogs without the threat of alerting Al Franken.

And if you promise not to tell anyone, I may just choose Michael Vick in the upcoming NFL fantasy draft
Posted by Greg Finley at 8:52 PM