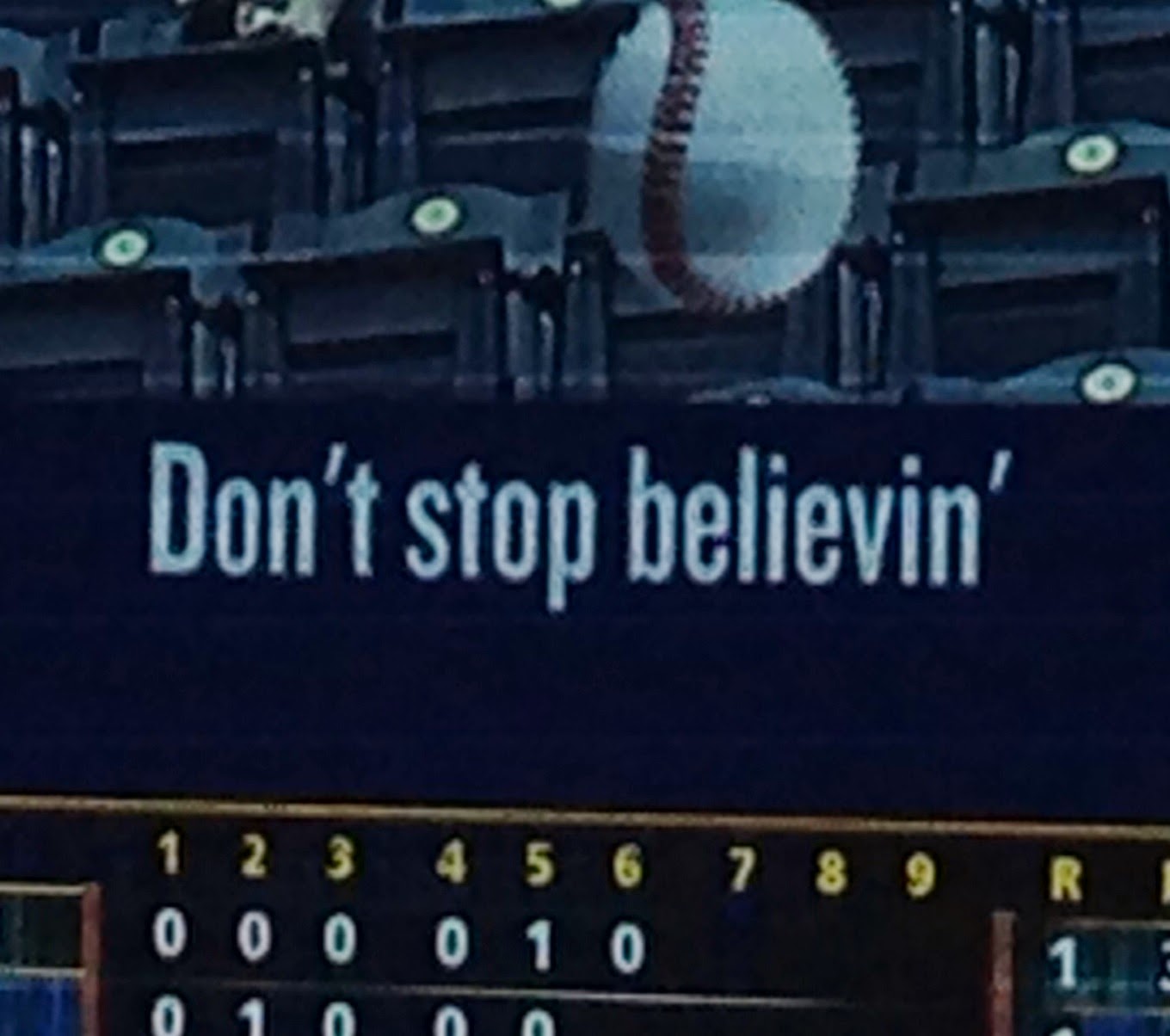 T    The Kansas City Royals have chosen a new sixth inning song this year, and I, for one, am not happy about it. Journey's classic "Don't Stop Believin'" won a hotly contested, tournament-style battle which concluded June 7th. The "power ballad" survived from a field of 32 songs and will replace Garth Brooks' "Friends in Low Places," which had been a mainstay for several years. I agree that "Friends" had to go. Although the song is certainly catchy, it's not exactly the anthem you want to define your city or fan base. But then again, we in KC may be more "Garth" than "Journey" anyway. But my quarrel rests not with Garth (after all, he went to Spring Training with the Royals), it is with "Don't Stop," and I offer the following five reasons why the song must go:

The whole “Don’t Stop Believing” thing, for our baseball purposes, is recycled psychobabble.  First, wasn’t this the whole theme in 2003 with Tony Pena’s “We Believe!” (Nosotros Creemos!) campaign?  This was a great theme but it’s had its day and no amount of Norman Vincent Peale will help the Royals hit Clayton Kershaw’s curveball  Tuesday night.  For more evidence on the recycling of this song, look back to the White Sox and Giant pennant runs during the past decade. It's a great song, but it's overused in this context

Journey  has some great songs, but don't you thing another band should get a chance?  The S.F. Giants already play a Journey song (“Lights”) and we can never rival it. My son and I wandered in on Matt Cain’s perfect game (one of 23 in MLB history) two years ago at ATT Park and the atmosphere during “Lights” was amazing. We should stay away from Journey, we could never own one of their songs like San Francisco does. Maybe something like Foreigner's "Waiting..." Maybe the chorus could be rewritten to "I've been waiting, for a Ser-ies game, since Nine-teen Eig-ty Five/ I've been waiting for a pennant race, since I could jog a mile...."

"Don't Stop Believin'" was supposedly chosen after 32 songs, two-at-a-time, went head-to-head during Royals home games throughout April and May. Fans made their choices via text message. I don't know about you, but I can't ever send or receive a text message when I'm at Kauffman Stadium. Maybe everyone in the stadium is a loyal Sprint customer like me, and we've all overloaded the system. This “tournament” was obviously a scam commandeered by T-Mobile and ATT customers. And if this wasn't bad enough, there was no apparent "intelligence" available for voters. No bracketology, no seeding, no anything. Not the sort of tournament I'm used to!

2. It has nothing to do with Kansas City

We need a song that speaks to the Kansas City Indigenes. “Lights” works in San Fran because it’s a song essentially about that town. (By the way, does the sun shine on the Bay or set on the  Bay? If the  latter, I need a native San Franciscan to explain that to me (you know--the sun setting in the  north or east). At this point you may ask, what are our options for repping our city in song? My job here is really not to offer solutions; it is simply to identify problems  But, I'll give it a shot. We could consider Fats Domino's "Goin' to Kansas City," but that song is already played at the conclusion of every game. Plus, it wouldn't make sense to sing that song because it is about going to Kansas City and if you're singing it at Kauffman you're already there and don't need to dream about it. Another problem with "Goin'" is that it is offensive to our female population, characterizing our women as "crazy" and "little."  Steve Wariner's "Kansas City Lights" might gain some traction, but it has  some of the same issues found with "Goin’" in that  it's a song like Glen Campbell's Galveston in that it's about a military man longing to be home. So again, if we sing it at Kauffman, we're already there and don't have to dream going there. I suppose we could imagine that we are actually in Raytown and dream of driving a few hundred feet to be back to KC.

At this point I could  try to offer another alternative but I believe I will stay  in my comfort zone and stick to identifying problems. As I look back at the preceding paragraph my "solutions" are really just a springboard to identify further problems.

The biggest issue I have with "Don't Stop Believin'" is that it makes strong lyrical references to a geographic region of the United States known as "Detroit."  It is one thing to sing a song in the sixth inning that has nothing to do with Kansas City.  It is quite another thing to sing a song which brings any further attention to the city which contains our division rival Detroit Tigers. Now some of you aging, purist, baby boomers may cry foul and say at this point the song says "South Detroit." Last time I checked, South Detroit is in the same Standard Metropolitan Statistical Area (a cool demographic and urban planning term) as Detroit proper. So, it's close enough.

But I'm not just a Detroit hater. I don't want to sing a song mentions other cities like Chicago or Cleveland or Minneapolis-St. Paul or even Fargo for that matter. Next these fans will want to sing "New York, New York."

Maybe this following point should have been put in my "Voter Fraud/Incompetence" Section, but I am wondering if the voters during each game at which “Don’t Stop” was contested realized the Detroit Tigers have won our division the last three years running? This would seem to be a major disqualification.

Well, there are my five reasons to Jettison Journey. Now it's up to you to come up with a solution or an alternate song. If not, you can just identify me as one of your friends in low places....
Posted by Greg Finley at 6:51 PM 1 comment: