Long Form Birth Certificate: Not Just For Heads of State 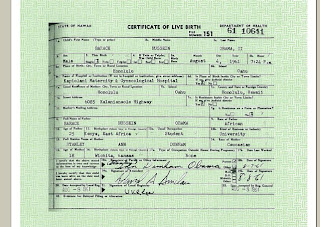 Who knew that there were various forms of birth certificates? Who knew, except for vital statistics geeks, that birth certificates came in an array of styles, colors, and options, not unlike their sister documents the 1040 income tax return (the "long form") and the 1040A ("not-as-long-form")? Maybe census takers knew. After all, they're in the habit of randomly picking every house without a rabid pit-bull to administer their "long form" interview. Maybe they knew what we didn't.

But we can now thank Donald Trump for bringing Hawaii's long form birth certificate into the public eye. Evidently Trump dispatched an investigative team (future Presidential aides Gary Busey and Meat Loaf) to the Aloha State to get to the bottom of the controversy surrounding President Obama's birth certificate. Obama had been under attack by his political opponents and accused of arrogance from his political allies for only releasing the short form version of the document. Today Trump claimed victory for smoking out the document from inside the stacks of Hawaii-5-0.

But the really stunning news from today's disclosure, irrespective of your political leanings, is that we continue to labor within yet another two-class system: those with only short form birth certificates and those with proudly possess both short and long forms. As we attempt to break down the various socio-economic walls and barriers that separate us, yet another schism emerges which makes us realize we're just lost in some endless game of Whack-A-Mole.

We've always heard the criteria. We've always heard about the "stuff" of Presidents. They're left handed or they're Masons or they're from the Skull and Bones Society. But the long form birth certificate has taken us by surprise. Yet another lofty difference between the "haves" and "the wanna haves."

But Wait! There is hope! For me personally, that is (but probably not for you). I just pulled out my birth certificate and am proud to report that I possess a long form birth certificate as well. In fact, my birth certificate is almost as voluminous as President Obama's (see photo above). His contains 23 boxes; mine contains 21. That's pretty doggone close. If not Presidential then my birth certificate is at least Gubernatorial. And it far exceeds any measly and laughable "short form," which reportedly just reports date of birth, whether or not the doctor was there or not, and if he was what he was watching on TV when he was telling the labor and delivery nurse what to do.

In fact, the Prez and I have a lot of stuff in common when our birth certificates are placed side-by-side. Although he's younger than me, we were both born in 1961--both during the baseball season in which Maris and Mantle were starring in a movie directed by Billy Crystal. We also both had mothers who were born in Kansas and were given middle names after famous kings (POTUS after King Hussein of Jordan and me after King Charles the Finley of the Kansas City Athletics).

The similarities continue. Surprisingly, neither the Prez nor I resided on farms at the time of our birth. We both were urban dwellers, delivered within well-defined city limit boundaries. Both of us were delivered by M.D.s and thus neither of us endured the disgrace of being delivered by D.O.s, midwives, or police officers. Neither of us were part of a set of triplets or sextuplets, although neither Hawaii nor Missouri were sophisticated enough at the time to even put a box on the form to check for sextuplets.

But I really need to stop boasting. Suffice it to say that I now know I've got a little more going for me than I thought I had when I woke up this morning. Me and the POTUS and the Long Form. It's not so bad, this view from the top.

But if you only possess the short form in your safe deposit box, and have to go through life wondering if you were born within city limits or if lived on a farm or were delivered by Marcus Welby, don't lose heart. Some of us and our potential were recognized from places even as obscure and remote as the delivery room of the Kapiolani Maternity & Gynecological Hospital in Honolulu.

Yes, people like us are given the Long Form. And the rest of you losers will just have to join Busey and Meat Loaf as Donald Trump staffers.
Posted by Greg Finley at 9:25 PM 4 comments: