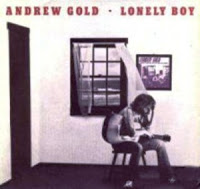 While strolling through my local Price Chopper last Spring, I was serenaded by the 1977 hit single Lonely Boy by Andrew Gold. Hearing the song somehow evoked memories of high school football two-a-days, and I was suddenly overcome by the urge to stink. My next move was to promptly go home and downloaded this iconic song from the Oracle of iTunes.   Because I’m avoiding preparing my turkey for its Thanksgiving frying, I decided to dissect this song for your pre-Thanksgiving pleasure. It’s a song about loss and the fleeting period of one’s life called toddlerhood. And it’s a song about a desperate longing to be an only child and to pummel all the other kids in first grade.
The song begins with a complicated piano descant consisting of two chords. These chords are pounded over and over until we are finally rescued by these opening lines:
He was born on a summer day, 1951
And with the slap of a hand
He had landed as an only son

From these lines we learn that the Lonely Boy is at his core a baby boomer. Born into the bliss of post-WWII Americana, the boy was slapped by the obstetrician (probably family practitioner) while his father bought cigars at the gift shop. For those in Generations X, Y, Z and Facebook, this was an ancient tradition that was obliterated when it became politically correct, if not mandated, that the birthing experience be a sort of clean-room family reunion. This was a paradigm shift from which we as a society won’t soon recover. But we digress…

The first verse continues and we learn of the Lonely Boy’s (let’s call him “LB”) parents’ first reaction to this new and emerging experience of parenthood:

Most parents in 1951 would be thinking about protecting their newborn from nuclear holocaust or wondering what the impact of the Eisenhower Interstate System would be on urban sprawl. But not LB’s parents. Instead, they were obsessed with warm coats and street-fighting. Fortunately before we can fully contemplate the parents’ obsession with schoolyard bullying, we are rescued by the catchy and melodic chorus:

We’re not sure why he was born lonely, but it may have had something to do picking on the babies in neo-natal intensive care. We learn little more about LB during the ensuing two years, and presume his father is busy attaching a pediatric punching bag on the aerial mobile in his crib and working on his rope-a-dope footwork as he’s fitted for his white high-top walking shoes. Then, finally, we get another glimpse through the window of LB’s life as the next verse pounds on….

In the summer of '53 his mother
Brought him a sister
But she told him "we must attend to her needs,
She's so much younger than you"
Well, he ran down the hall and he cried
Oh, how could his parents have lied?
When they said he was an only son
He thought he was the only one

This verse is rich and provides much fodder for psychological analysis. We learn that LB’s little sister, simply by virtue of being born, creates the greatest case of sibling rivalry observed in history until the creation—much later—of Drs. Miles and Frasier Crane. We also learn that LB was in fact a genius, capable, at birth, of discerning the meaning of being the “only son.” And we learn that his parents were not only abusive war mongers, but turned their back on young LB as he reached his second birthday, forcing him to terrorize the hallways of preschool and kindergarten on his own, devoid of any parental love, support, or munitions.

After Mr. Gold shouts the chorus a second time, we engage a killer guitar solo that lasts an electrifying 16 years. In reality, this solo only takes about 47 seconds of the song, but when it concludes we discover LB has reached adulthood and we find him dodging the Vietnam draft. Let’s rejoin the song as passes from the innocent Fifties into the turbulent psychedelic Sixties…

He left home on a winter day, 1969
And he hoped to find all the love
He had lost in that earlier time

Evidently his parental hatred had festered long enough. He had fought all the fights and attended all the schools and worn all the coats that his parents would fund. So he moves out, in search of the love that he lost when his sister had the audacity of being born. It’s at this point the story shifts to LB’s sister, and we’re saddened to learn that the dysfunction of this family has festered into a multi-generational slugfest. Consider:

Well, his sister grew up
And she married a man
He gave her a son
Ah yes, a lovely son
They dressed him up warmly
They sent him to school
They taught him how to fight
To be nobody's fool

Learning nothing from the train wreck that was her brother’s life, the sister married someone just like her father, and adopted the values and mores of her mother as they pertained to parenting on the edge. The sister and her husband employed the narrow focus that had rendered LB a ne’er-do-well. Ignoring the past, they were doomed to repeat it with the nephew that LB, sadly, would never meet.

After some more guitar licks, and some energetic keyboards, the piano reins us back in and we’re bid farewell as Andrew Gold sings one last time:

What can we learn from this almost forgotten 1977 classic? You can do a lot with two hard charging chords. But when the music ends a few lessons remain. Surely we can teach our children well, and let them lead the way by discouraging violence. Sure, we need to dress them up warmly and we need to avoid truancy at all costs. But besides that, let’s encourage family unity and avoid sibling rivalry. Make sure your newborn understands there in fact may be other children that come into your nest. And most importantly, make sure you read him, in utero, How to Win Friends and Influence People. That way he'll not be so lonely in the hospital nursery.