Considering a Day Trip(s) to the U.S. Open 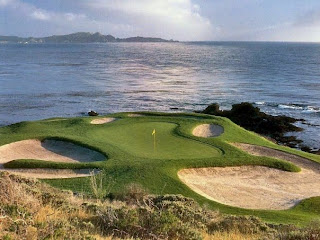 Ah, Pebble Beach…the greatest meeting of land, water, and unadulterated greed. As we prepare for this week’s United States Open, to be held at the venerable Pebble Beach Golf Links, imagine the following exchange taking place in a bedroom near a master bath....
=========================

“You’re late dear!” says wife to husband. “I tried to call you but your phone just went to voicemail. I was worried sick! Did you have to work late again?”

“No dear,” says husband, “remember, I went to the U.S. Open today. We discussed that this morning at 3:57 a.m. while I was leaving for the airport.”

“Oh that’s right sweetie,” says wife, “You’ll have to forgive me, my Advil P.M. was still hard at work keeping me comatose when you kissed me goodbye. That seems like yesterday!”

“Why, I declare,” says wife to husband, “I guess it is Friday. At least you can sleep-in tomorrow and go to work late.” (The wife’s voice fades as the husband steps in the shower near the master bath)

The husband eventually emerges from the shower, shaves, and puts on new golf attire. “Honey, I’m off again to the Open. I’ll be home again in about 22.5 hours. Would you mind washing this plaid Izod outfit you bought me at the thrift store? I want to wear it again Saturday.”

“Saturday?!” The wife sits bolt upright in bed. “What do you mean Saturday?” Her slumber is now supplanted by slow burning but accelerating wrath.

“Would you rather I wore it Sunday? I can wear the argyle Satur-“

“Sunday?!?” The wife gasps. “But that’s Father’s Day! You were supposed to assemble the grill we bought you then cook for the neighborhood!”

“Darling, we’ve been over this a thousand times. I’m commuting this year to the United States Open. I went to great lengths to explain this to you while you were alphabetizing the spices a few weeks ago.” The husband reaches into his briefcase to reveal a camouflage dossier and travel itinerary. “Once again, our recreation budget would not allow me to book an affordable hotel room within 100 miles of the Monterrey Peninsula. I had two free flights on Southwest and found deals on two other airlines for $300 each—round trip. One night at the Monterey Marriott is $757.78. I sleep about as well on the plane as I would at the Marriott. So…I’m commuting. Now give me a big smooch and fry a couple of eggs over easy…please honey lover?!”

You see, golf fans everywhere who would like to attend this great golf tournament are being forced to reconsider because of the outlandish and opportunistic price gouging perpetrated by the hospitality industry in and around Pebble Beach and the larger Monterey/Carmel/Pacific Grove area of California. Even thought tickets to the event are reasonable and at least three airports—San Francisco, Oakland, and San Jose—offer travelers reasonable airfares, the tournament attendee is slapped in the face when attempting to find a room—any room— in an inn.

Even rooms at Motel 6, the brand whose spokesman Tom Bodett promises to “leave the light on” for you, have been going for rates exceeding $300 per night. So much for “economy lodging.”

So why wouldn’t an astute golf fan consider community to the Open to avoid paying these outrageous room charges and their accompanying “hospitality taxes?” I believe the idea has merit.

Originally at this point in this “essay” we had planned to demonstrate the infinite wisdom demonstrated by commuting to Pebble Beach this year. However, in the interest of sound journalism we must confess that the idea has a few holes. Not the least of which we’ve discovered is traffic, drive time, traffic, unprecedented inconvenience, and the lack of a direct flight from Kansas City International to Pebble Beach’s number 1 Fairway.

So I’ll leave it to Michael Lewis (The Blindside, Moneyball) to research the market inefficiencies of commuting to Pebble Beach from Garden City, Missouri. For now, we’ve done our job. We’ve floated the idea out there for the general public and academia to digest.

Thus, instead of flying home tomorrow night after Day 1's competition, we'll just sing to our GPS System: Do you know the way to San Jose?
Posted by Greg Finley at 8:29 AM 3 comments: