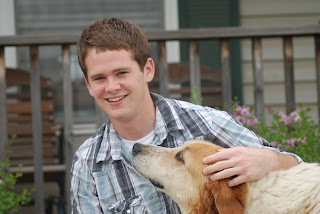 Editor's Note: This story is not funny, but we didn't have anywhere else to go with it....

Much has been written about the dog. He’s man’s best friend and all that. We’ve cried about dogs from Old Yeller to Marley and Me. But those stories have always been about someone else.

Yesterday while walking my youngest daughter’s puppy I discovered our oldest dog Drover out in our pond. He was several yards from the bank, looking at me with a look that was a combination of sheepishness and of fear and of discomfort from the late October chill.

At first I thought Drover was simply going for an Indian summer swim, or more accurately a wade. Such an activity was not out of character for him, as often I would observe the four muddy paws that betrayed him.

But this time it was different. He wasn’t moving, and no amount of coaxing or cajoling could dislodge him from his muddy berth. He was stuck in the Missouri muck that had accumulated from a decade of spring gulley washers.

Freeing himself from his quagmire would have been a snap for Drover in his youth. An amalgamation of large breeds—Great Pyrenees and Coon Hound mostly—he had once been a rugged specimen of vigor and strength. But the years have not been kind to his large frame. Arthritis and other age-related maladies have taken their toll on him. Lately he would mostly lie around, and getting to his feet was indeed a chore, as the hours in one place would leave his arthritic joints “stoved up.”

So there he was, trapped, with little hope of unaided escape. After getting our puppy back in her kennel, I put on some boots and waded out to my loyal friend. If the water was cold, which I’m sure it was, I didn’t really notice. After getting a collar and leash on him, I tried to pull him out like a winch on a tow truck. The collar kept slipping over his head, and I began to fear it would act more like a noose than a lifeline.

So I regrouped, throwing the collar and leash aside. After freeing myself from the mud, I was finally able to pull him to the bank where he lay shivering and unable to stand or really move at all. The long odyssey to shore had taken all the surviving energy out of him. I couldn’t stand him up, so I went back to my house and called our vet, Dr. Morse, for some advice.

After our consultation I decided to try to get Drover to our barn and put him under some heat lamps. This process took about an hour as I had to carry him inches at a time until I could finally hoist him into the SUV. My little ambulance then took him to the barn, where I managed to lift him out and set him on the floor under the warming red lamps.

Dr. Morse suggested an elixir of maple syrup and water to give Drover an energy boost. He’d have none of it, and just lay cold and lifeless on the concrete floor.

After a warming night among soft blankets in the barn, Drover now lies in Dr. Morse’s office, his fate to be determined after a couple of days of observation.

I never really understood the degree of sadness that some people seemed to experience about their pet. After all, they are just animals. And, from an eternal context, I still believe a pet’s significance is over-rated.

But I realized something as I pondered whether or not these days are Drover’s last. A dog is indeed part of a family and indeed provides pleasure in-and-of himself. But a pet like Drover represents so much more.

As I think about Drover’s 13 years I see snapshots of our family and snapshots of myself. During his first night with us, I pulled his fluffy whining body up with me onto the couch where he finally fell asleep with me until morning.

I see him in the back yard when we lived “in town,” playing with the kids. I see him in on our little back deck in my daughters’ Little Tikes castle, a structure that he eventually commandeered for his dog house.

I can still hear him in the middle of a night in 1999, whining and crying out in that same back yard while I was desperately trying to go back to sleep in my warm bed. When the racket wouldn’t stop I went to investigate, and discovered he’d somehow gotten himself entangled in one of the swings of our kids’ swing set. It took me several minutes to free him from his contorted state, perhaps a sad foreshadowing of what one day lie ahead. Finally freed, he didn’t look back to thank me, but just wandered back off to bed, undoubtedly asleep again before I was.

One day I put together a chain link pen for Drover. I remember while constructing that thing, looking at the directions, frustrated no doubt, I got a call from my friend Al Reed. That day Al told me about the birth of his only son. After hanging up I went on back to putting together Drover’s pen.

The memories of Drover flow on. They are good memories of the dog himself, but more than that they are a thread that weaves our family together. Drover is somewhat of a final link to an earlier time when my identity was that of a father of young children.

As long as a dog lives, the family in some sense is linked to the era from which he first came. Drover is the last vestige of a time when I was young myself and the final composition of our family was still not yet fully revealed.

It is perhaps one of the great sorrows of family life that a child grows up while his or her dog grows old. I did it with the dog I got when I was eight years old. One day while I was at college my father called me and told me he’d taken Spotty (yes, I know, an original name) to Wayside Waifs in Kansas City to be put to sleep. It was time. Practically unnoticed during the presumed busyness of my collegiate life, I paused for but a moment, not fully realizing what a step out of boyhood and into manhood that day was.

And so it is with our children. Drover came into our lives as a free puppy that we weren’t even sure we really wanted. And since that time he has remained a fixture, outlasting other dogs as he presided over our kingdom with patriarchal formality. Never really playful, he just “showed up” every day. You knew he loved you, by his nuzzle and by his presence.

As Drover lies in the vet’s office I know it is only a matter of time. He may survive a few more days, or months, or even a year, but his vibrant dog’s life continues to ooze out of him. He is a sobering picture of the Apostle Paul’s statement that “the whole creation has been groaning with the pains of childbirth until now” (Romans 8:23b) When he goes, a big part of my kids’ childhood will go with him. And a little bit of me as well.

I don’t know if dogs go to Heaven. If they do I know our focus on them will be minimal as we gaze on the beauty and glory of our Savior. But while on this temporal Earth, Drover has been a rich blessing to me and my family. Taken mostly for granted, his companionship and unconditional love will be sorely missed. In this picture of the Fall, we are reminded that our hope must be in eternity and in the grace that overcomes the groaning.

And now the cycle begins anew, as my youngest daughter’s puppy, just four months old, grows and frolics and provides a new context and a new backdrop for more years of precious family memories.

May they be as sweet as those given to us by Drover, our kind and loyal companion and friend.
Posted by Greg Finley at 5:08 PM 14 comments: