The Twinkies and Greinke 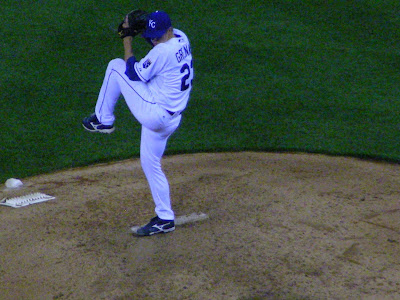 My brother is on an Alaskan cruise, so he gave me a week's worth of his Royals season tickets. In the spirit of Beaver Cleaver, my immediate reaction was "Gee Wally (not my brother's real name), do I half ta go?" I endure enough pain, torment, and blown saves during the day not selling commercial real estate, so I was not necessarily excited about continuing the frustration after hours at Kauffman Stadium.

As it turned out, I could only go to two of the six games, the first being this past Sunday where my expectations of utter frustration were fulfilled. Among other things, I was treated to the Minnesota Twins' 8-run 7th inning which featured Michael Cuddyer's two home runs, a feat not accomplished in the major leagues since David Ortiz did it for the Red Sox last year. I also endured the Royals feeble attempts at a sacrifice bunt while observing the Twins' perfect execution of this most basic of baseball fundamentals.

Other lowlights included a drunken Twins fan who insisted on remaining shirtless for most of the game. He kept waving his Twins hat throughout the game while turning around so that the sun could fully burn his massive girth. To my surprise, when he finally put on his shirt it was a George Brett Royals jersey. I'm not sure to whom the most dis-service was delivered. Was it the Royals jersey to the Twins cap or the Twins cap to the George Brett jersey?

To pass the time I surfed my Blackberry to see how many games the Royals were out of first place as I wondered if they had yet been mathematically eliminated. I then learned from mlb.com that the Royals were about 19 games out of first place and maybe five games out of 4th place in the AL Central. They own the worst record in the American League but are some three games better than the Washington Nationals of the National League. As if this were not depressing enough, I saw that the Royals were 24 games out of the wild card playoff race. So let's get this straight, it is five games harder to be the 4th best team in the American League than it is to be the Division leader and presumably third best team? Oh well, at least we're better than the Nats.

When the game was over the drunken Twins fan pulled a little broom out of his back pocket to celebrate his team's sweep of the American League's worst team. It was a little wimpy broom, smaller than the whisk broom that the umpires might use during the game. Although it takes a little nerve to bring any broom to the opposition's ballpark, if you're going to be that brazen you should not apologize for it with a whisk broom and come with an industrial strength broom. Crocodile Dundee would have not approved. But this guy had the ultimate defense. If anyone ever considered hitting him he'd pull out his George Brett jersey. A Royals' fan hitting someone in a George Brett jersey is worse than a guy hitting a girl with glasses. It simply cannot be done.

Mourning turned to dancing though when I went to last night's (Tuesday's) pitching gem offered up by the Royals' ace, MVP, all-world, hope-for-the-future, and walk-on-water stopper Zack Greinke. Greinke amassed 15 strikeouts during his 8 innings of work. This total eclipsed his previous personal best of 11 K's and broke Mark Gubicza's Royals' record of 14 set in 1988.

Greinke has changed the way I watch a baseball game at Kauffman. I used to plan trips to the bathroom, concession stand, and miniature golf course around the opposing team's at-bat. I used to want to watch the Royals attempt at offense and wasn't too interested in watching them in the field. After all, I know what it looks (and feels) like to miss a cut-off man. However, with Greinke on the mound, I now will not leave my seat while he is pitching. I'm content to hear the Royals at-bat over the radio play-by-play in the men's room or watch it standing in line at the concession stand. I'll be perfectly fine missing a grand slam or a hit-and-run or even a perfectly executed sacrifice bunt, but I won't miss a Greinke pitch. They are too beautiful to watch, especially the slider that was responsible for most of last night's strikeouts.

Greinke has become a sport within a sport. His pitching is so phenomenal that you forget that he's a play within a play. He's a Mid-Summer Night's Dream. And even though the Royals are entrenched in a bomb of a 2009 production, the Act that is Zack Greinke stands alone.

And last night, that was enough.