A Penny Pilfered is a Penny Earned 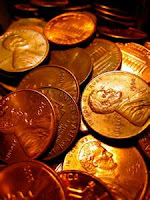 It was a plain sign, barely legible in black marker and affixed with a clear piece of tape to the cash register. Yet, as it hung over the little container of pennies on the convenience store counter, it spoke volumes about the state of the U.S. economy. Its words were simple yet eerie: “Need one or two, take ‘em. Need three, get a job loser!”

The sign in this rural convenience store in the Upper South went up shortly after one customer took fifteen (15) pennies from the small, brown tray so that he could apparently purchase an 89¢ can of Dr. Pepper for 74¢. Showing little regard for his fellow consumers who would follow, he emptied this community chest and forced dozens of subsequent customers to break nickels and dimes, and in a couple of extreme instances— Susan B. Anthony Dollars.

Yes, we have indeed fallen on hard times. Forget indicators such as housing starts and retail sales and unemployment and manufacturers’ orders. Apparently the American consumer, in a desperate need to pinch pennies, has stooped to pinching pennies, literally, from the community penny pot.

Economists disagree as to the origin of the community penny pot. Indeed, this practice represents a relatively new medium of exchange and it is almost exclusively the domain of the convenience store. I figured this out when I asked the clerk at Dillard’s to slide me some pennies to supplement by maxed-out AMEX card for a recent clothing purchase. She had obviously never shopped at Lazy Lee’s Bait and Convenience. But the community penny pot, like most good ideas, was borne from a desire to solve a problem—bankruptcy. No, actually that is the problem Mr. Dr. Pepper was trying to solve.

Initially the community penny pot was designed to rid or minimize ourselves of annoying loose change. You’ve seen the signs—“Need a penny, take one; got a penny, give one.” Sure the concept reeks of socialist principles, but it has worked and given us pride as in some small way we would leave the convenience store thinking that we’d beaten somebody out of something and helped us forget we just spent $1.69 for that 20 oz. Co-Cola. We could also leave satisfied knowing that we had just given two cents to the next guy in line, even though we would never consider taking him to lunch.

Unfortunately, I believe excessive penny pilfering is not isolated but in fact widespread. It offers us evidence that much larger economic forces are at work. Like most economic laws, like life insurance, these forces are not easily understood and undoubtedly global in scope. Let’s dig a little deeper—under the cushions if you please—and see if we can tell what’s going on.

One theory: increased copper prices. After all, copper is trading at about $4 per pound on the New York Mercantile Exchange. These numbers reflect a jump of about 100% in just a few short years.

Let’s do the math here. According to my Pitney Bowes postage scale, ten pennies weigh .8 ounces. Everyone knows (except for me 10 minutes ago), however that a penny is no longer 100% copper but instead 2.5% copper with the remaining 97.5% comprised of donut glaze, Snicker’s residue, and caramelized dryer lent. The rest of the metal is actually copper plated zinc, and zinc is spotting at around a dollar per pound.

If copper and zinc outstrip the face value of the coins, a veritable avalanche of economic repercussions will follow. People will begin robbing children’s piggy banks. Consumers will take to making change out of offering plates. The man who once pilfered 15 pennies for a Dr. Pepper will now do something much more ethical but equally troubling economically and toss back three nickels.

The resurgence of penny popularity will have far-reaching implications. Indeed, the fallout will impact economic and non-economic walks of life. In random acts of physical exertion not seen in post-depression America, I foresee a day in the near future when people young and old will once again, stop in their tracks and actually bend down and pick up one of these little coins. I can see a new demand  for 50¢ rolls of coins. I can see people paying pennies for thoughts worth much less.

I can see children across the country once again wearing money belts and nerdy money changers. I can see businessmen proudly wearing new shiny pennies in Italian loafers, finally understanding the coins are worth more than the shoes. I can see parents and children thinking twice before putting a penny and three quarters in a theme park vending machine with the intent of transforming the coin into a trinket.

But most importantly, I can see a day when Mr. Dr. Pepper will once again get a job. And then, and only then, will we be reunited with economic equilibrium.
Posted by Greg Finley at 9:02 PM