All's Fair in Words With Friends 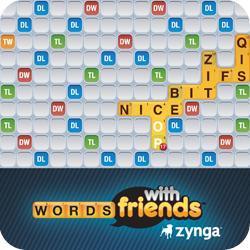 As if Facebook wasn’t addictive enough, I now have another distraction in the Zynga app for Facebook called “Words With Friends.” Words With Friends (WWF) is essentially Scrabble with unlimited opportunities for participants to cheat.

WWF is played on your computer or other electronic device which sort of makes it Scrabble on steroids. One can play several different games at the same time, and there is no time limit during which you must make your move. This latter feature is critical as it affords one the opportunity to go make nachos or vacation in Paris between moves.

But WWF, like it’s cousin the World Wrestling Federation, is not just a game but bone-crushing, contorted , and sometimes serious competition. It certainly gets one's competitive juices going, and in some instances it keeps people from carrying out important daily activities like working, sleeping or going to the bathroom.

It's especially distracting when people send me game requests or "moves" during the business day, which is loosely defined as "when I happen to be sitting at my desk." Last week I was in a critical phone discussion about a real estate contract that will certainly never close and pay actual money. Thus, I put the party on speaker phone while I scoured my computer screen trying to find a strategic placement for the “Q” and other random letters which I’d been dealt. When asked an important question about a key paragraph in the contract, I started to blurt out “Quasar!” As if this wasn’t bad enough, I contemplated concluding the call by saying “while I have no substantive issues with this contract, I believe your use of the word ‘estoppel’ should be disqualified because it might be a proper noun.”

WWF causes one to contemplate drastic things like cheating, stealing, and opening a dictionary. The other night in a desperate attempt to keep my wife from taking a three game lead in a best of seven series, I started dreaming of buying vowels on the black market from a Colombian vowel-lord. Since there is no time limit for making a play in WWF, one has unlimited opportunities to consult friends, relatives, or the late Noah Webster. If particularly devious, you may consult Scrabble websites by asking questions like “What’s a five letter word that starts with Z and ends with R and has a J as the third letter?”

I would never do any of these things, unless the game is against my wife. She is a wordsmith, par excellence, so I will resort to all manner of deceptive practices in my attempts to beat her. Last week while she was taking a shower, I happened to walk by her computer and noticed the game we were playing against each other right there on the screen in front of me. It was her turn so I decided to help out by making a move for her. It just so happens the word “IT” was the only play I could see in the three seconds I had to make the decision. Can I help it if “IT” is only worth two points? She should’ve logged out before taking a shower....

Not only is my wife extremely competent--dare I say talented--but she knows words that I shouldn’t know. The best example is her use of profanity against me. While engaged in WWF competition, I will not resort to using synonyms for “defecate” and the like, but she employs them freely, demonstrating no shame in the lengths she will go to ensure my humiliation. As a gentleman, I will not resort to the use of such words, unless of course they are recommended by scrabblefinder.com.

I highly recommend WWF, unless you have burdensome demands on your life such as a job or family. If not, then have at it, but don’t let the intensity of the competition change who you are at your core.

I must go now. I’ve got an 11 o’clock with a Proper Noun who represents the Consonant Cartel.
Posted by Greg Finley at 12:02 PM