Is Dr. Heimlich in the House? 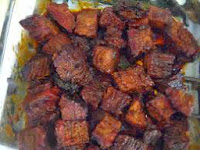 Kansas City BBQ addicts have a dirty little secret. Sometimes, in exercising our passionate desire to consume smoked meats, we forget to chew.  Such was the case last night at Jack Stack in Martin City, as Sandee and I met our old high school friend Roger Denney there for dinner.

Roger, raised in Kansas City, is as fine a connoisseur of Kansas City BBQ as you will ever meet. Now he practices anesthesiology  in the D.C. area where he sports a Virginia license plate that simply says “KC BARBQ.”

So you see barbeque is serious business for Roger. He knows his stuff. Since Jack Stack is his favorite stop when he comes back home to visit his mother, we were only too happy to share a decadent Jack Stack meal with him, the last such one he will enjoy until his mail order shipment of burnt ends and such arrives for his annual Christmas Eve dinner back East.

After devouring some famous Martin City fare, we were enthralled in post-dinner conversation. But as we relaxed, piecing together the better part of the last thirty years, a commotion from the other side of the room distracted us. Tables were pushed aside, people rose to their feet, and a voice cried out: “Does anyone know the Heimlich?!?”

Suddenly before my very eyes, Roger Denney, 17-year-old post player and all-star student, was transformed with phone-booth-like speed and precision into Dr. Roger “Heimlich” Denney, Man of the Hour.

Roger sprung to his feet, raced across the room, and was presented with a petite young woman who had fallen prey to a giant cube of burnt end of brisket. Roger quickly assessed the situation, found the proper location of the woman’s sternum, then raised her forcefully from behind in an effort to dislodge the giant hunk of beef that was obstructing her air flow.

After a couple of tries it looked like the woman had been freed from her barbeque-induced trauma. So Roger turned to her and asked her to speak. She could not. He then resumed the procedure with three more pushes. The offending morsel was then freed from its esophagul berth.

Roger returned to our table amid fanfare and appreciation from our fellow diners. We told him it was fortunate that he, Dr. Roger Denney, had been in the house and had gone to medical school and had done all of those E.R. rotations and the like. All of that experience for this moment. Roger could have agreed with us, but dismissed the act as basic first aid, presumably anything the local life guard could have done.

Maybe he’s right, but he performed the Heimlich on this young woman with such skill and care that she was barely impacted by the entire experience. I don’t know about you, but if I almost perish in a crowded restaurant in Death-by-Choking fashion, I may ask for the check and go home and make a fruit smoothie and call it a night. I may pause for a bit and wonder if I need to at least call my mother to have her come and cut up my meat.

But this woman was a BBQ Woman superhero. She jumped back in the saddle and ate the hair of the dog that bit her. It was like someone had told her “As You Were,” and she rejoined her Burnt End Euphoria in progress, barely skipping a beat, even though a table or two around here, with contorted faces,  had cleared out and headed home rather than enduring to the end with her during her plight.

Jack Stack was very appreciative of Roger. Our server came over and told him that for his efforts the restaurant would like to buy him a dessert.

I guess this was a nice gesture, but if I’m Jack Stack brass, and Dr. Denney had just performed life saving heroics in my dining room, I’m springing for more than a piece of carrot cake. I’m naming a sandwich after him. I’m dubbing him the new “Martin City Mayor.” I’m shipping him Kobe and babybacks once a month for life.

But the ever-humble and gracious Roger, thanked Jack Stack for their generosity, and asked them to give him his dessert to go. For this kind soul, it was all in a day’s work.

But the rest of us...we were treated to a tiny glimpse of how some very fortunate patients are treated in Washington D.C. each day.