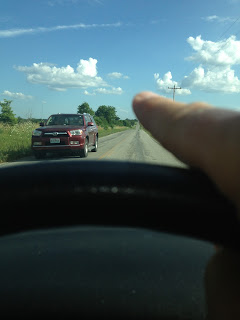 If we are anything out here in the country we are wavers.

We wave at every available opportunity. We wave at our rural mail carrier. We wave at the UPS man. We wave at the meter reader from the water district. I think I’ve even waved at a suspected meth chef or two as they’ve whizzed on down the road.

Although country waves are effective while sitting, standing, piddling and what-not, our best waving out here occurs while driving. It is a major country faux pas to not wave at an oncoming vehicle while behind the wheel. Waving expectations heighten with particular road and vehicle types. Case in point: In some counties, if one fails to wave at a pick-up truck while driving on a gravel surface, the local prosecuting attorney may file misdemeanor charges.

There is not a specific prescription for how one waves. Most simply raise their pointer finger slightly above the top of the steering wheel. You want to lift this finger high enough to be noticed, but not too aggressively lest you startle the oncoming driver.

This is the so called “finger nod,” One can use any finger he wishes during the conveyance of the finger nod. Certain fingers should be avoided, for obvious reasons and to avoid confusion with the sort of less-friendly gestures that are used in the city. And, use of the pinkie is sort of frowned upon. It’s considered a little half-hearted and likely to betray suburban roots.
One should also stay away, while driving, from the literal raised hand wave. A literal wave is seen by most country folk as sort of desperate and screaming for attention. It implies you don’t have enough country business on your mind. The wave is never about the wave itself. It is a vehicle for delivering respect. It’s a subtle, dignified acknowledgment that we’re all in this together.

In some townships waves may be replaced by head nods, or more accurately head bobs. The head bob can either be a slight lift of the head about five degrees backwards, or a slight downward head movement that is quickly returned to the starting position. I often employ the head bob during the operation of a riding mower. This gesture is universally accepted by passers by. No one expects a man on a lawnmower, tractor, combine or any other piece of machinery to hinder the safe and productive operation of said machinery by ceasing to steer the machinery—even momentarily—for  the sake of a wave.

Another thing about driving and waving on the road is you start to recognize your neighbors and other folks by the grille on their pickup. Then thoughts just run through your head…’Yeah, that’s Jim. He needs to apply some bug and tar remover….’ ‘….Billy Wayne is missing the "G" from his" GMC"….’ ‘… Mr. Blake still has that big old crack in his windshield….’

I came to the country wave late in life. I was exposed to it initially during college in the early 1980s while driving along Farm Road 1217 outside Springfield, Mo. My first reaction was a childlike curiosity on how the nice farmer might know me. My curiosity turned to panic as it occurred to me that he might just sort of know me but really know my parents. I finally realized something bigger was going on along Farm Road 1217 after three of the next four oncoming drivers also waved at me. It was then that my love for the country wave was born. When I eventually moved to the Kansas City hinterlands,  I could finally own it.

When we leave the country and venture back to the city, we can’t turn off this habit of waving. It’s now a built-in reflex. Sadly, no one in the city waves back. In fact they look at us like I looked at that farmer in Springfield back in 1983. My son Davis has grown up waving at folks. While far from a country bumpkin in all other ways, the country wave has become part and parcel of who he is. He’s working is in Panama City Beach, Florida this summer. Much to his chagrin, no one there waves back at him either.

I hope Davis and my other children raise my grandchildren to be wavers. Even if they live in the city, training a child to wave the country wave should be an integral part of child rearing. It’s as respectful as a Georgia father teaching his children to say “Yes sir” and “Yes ma’am.”

Let’s not forget, however, as we teach our children and grandchildren to wave properly, that there are real live human beings behind those steering wheels. Let’s not just blindly wave at them without being willing to step into their worlds. Let’s not substitute the country wave for real, live, down-and-dirty interaction.

The next time you look over the steering wheel and see me coming at you, flag me down and pull me over. I’ll have a thermos of coffee that we can share right there in the middle of that gravel road.

And if you don’t like coffee, I’ll have some bug and tar remover and we can go to work on that grille.