Late or Early? You Be the Judge 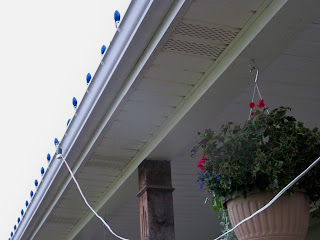 As June draws near, it’s a time for us to ask ourselves some serious and probing questions. Questions like:  Is it too late to take down Christmas lights?

When I was growing up my father made it abundantly clear to me that nothing spelled “L-O-S-E-R” quite like the homeowner who could not get around to taking down his Christmas lights by Groundhog Day. We scratched our heads at those neighbors who would head into Spring with their decorations still screaming “winter!”

So now, here on May 21, I stand sufficiently humbled. I've become the loser of my childhood, as my Christmas lights remain firmly attached to my house, dangling innocently above my wife’s Mother’s Day flower baskets. They  now stare down at me each day, a mocking reminder of my inability to even master one of the seven habits of highly effective numbskulls.

I find solace in the fact that even though we’re in late May, the season we know as summer technically doesn’t begin for another month, when one of the most important solstices—the MLB June Amateur Draft—takes place. This critical solstice should not be confused with the lesser-known “Summer Equinox,” which does not exist. Great Astronomers and weathermen from Galileo Galilei to Al Roker  have recognized that the equinoxes are celebrated only in March (Vernal—after Vern Gosdin) and September (Autumnal—after “Fall”) when we have nothing better to do than note that the days and nights are equal in length at the equator (right…as if we’re ever actually going to be there).

But the point is that I have four weeks or so before it’s really summer. That’s a lot of time to evaluate my options. But by then the U.S. Open will have concluded and we’ll be thinking about buying fireworks so if you can’t call it summer by then, well then, you must be in New Zealand.

But what, you may ask, happens if Flag Day comes and goes and your Holiday Display is still firmly attached to your sagging gutters? You may wonder how I personally will handle this situation when I wake up on the morning of June 15. I fully intend to handle this situation by acting like it was my plan all along. I will simply acknowledge that I have a 5-6 month head start on all other 2013 Holiday Decorators.

The benefits will endure throughout the remainder of the summer and pay big dividends long after the first autumn frost. Come Thanksgiving, you’ll be out frying turkeys instead of crawling up to your attic to untangle the lights which had mysteriously since last year wrapped themselves around that highchair your wife is saving “for the grandkids.” If that doesn’t get you going, then picture yourself this coming December parked in a lawn chair on your property line, sipping a steaming triple espresso, as you watch your neighbor traverse his ladder and downspouts, leaning at a 45 degree angle right before he rides down his icy roof to his frozen concrete driveway below. If that’s not entertainment I don’t know what is! And YOU made it all happen by getting a jump on everyone else in the neighborhood. You bucked the trend, didn’t succumb to peer pressure, and stood your ground while others thought you were an idiot.

And while you and I may be losers in June, we’ll have the last laugh in December.
Posted by Greg Finley at 8:24 PM