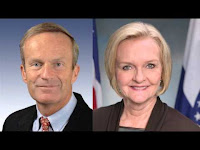 Kansas City—In a surprise move today, Senator Claire McCaskill (D-Mo.) announced she has fired the advertising agency responsible for the attack ads aimed at her Republican opponent, Representative Todd Akin of St. Louis County.  The firing of the agency, Plus+Plus+Plus, comes on the heels of the firm’s release of a fifth consecutive ad depicting Akin in exclusively black and white photography.

“The good people of Missouri have a right to judge Todd Akin on the entirety of his personhood, including the color of his clothes and skin,” said McCaskill in a prepared statement. “And quite frankly, my recent advertising campaign has deprived the Show Me State’s electorate of that opportunity,” she said.

In the aftermath of  Akin’s  victory in Missouri’s Republican Senatorial primary, McCaskill launched a no-holds-barred assault on Akin’s conservative principles, citing the Congressman as “out of touch with mainstream Missouri,” but most alarmingly depicting him as disgustingly “non colorful.” McCaskill’s ads have only portrayed Akin in black and white images and most of the photos were blurry, contorted, and appeared to portray Akin as picking his nose. In one of the most aggressive of McCaskill’s  television  commercials,  Akin was shown brandishing an axe dripping with blood. In every instance, McCaskill was juxtaposed in colorful designer ball gowns and business suits, typically with a smile on her face.

“I admit that I am scared to death that the voters of Missouri will realize that Todd Akin actually has very beautiful blue eyes,” said McCaskill, peeking through the window of her limousine parked just outside of the Nodaway County Courthouse. “I’ve spent many sleepless nights wondering how my chances might turn if the voters saw that really snappy red and blue tie Todd rocked at last year’s Joint Chamber Christmas Party," she said. “But I have decided I must win or lose on the issues, not on the our ability to Photoshop that smirk on Todd’s face—Hah-Hah, but that was a pretty good one, huh?” she said as she slapped her knee repeatedly.

McCaskill’s announcement sent shockwaves through the Democratic National Committee. DNC Chairman Rep. Debbie Wasserman Schultz, when told of McCaskill’s decision, was beside herself. “What was Claire thinking?” said Wasserman Schultz. “Now we must develop a whole set of talking points that are grounded in factual information. We were prepared for almost every eventuality, but we certainly didn’t see this one coming,” she said. “I need to get back to Florida to develop a strategy that will not include Photoshop.”

The Akin campaign seemed equally stunned and was also caught off guard by McCaskill’s announcement. “We are obviously pleased that in Senator McCaskill’s commercials Todd will no longer look like he walked off the set of a 1962 Perry Mason episode,”  said Akin Communications Director Ryan Hite. “You know, even if it was that one really cool episode, I think it was The Case of the Terrified Typist where Hamilton Burger had Perry dead to rights...well, anyways—no one in this Millennium  likes to be portrayed picking his nose in grayscale.”

Akin, boarding a plane at Lambert Field in St. Louis, seemed upbeat when told the news. “Good for Claire,” he said. “I’m glad I packed that navy blue double-breasted sport coat for this trip.” Maybe she can get a couple of shots of me in that,” he said.

Although not confirmed, it was reported that the campaigns intend to get together next week to discuss the viability of a series of debates for later this Autumn in which McCaskill and Akin will wear the exact same outfits and avoid make up of any kind. An unidentified source, speaking on the condition of anonymity, said both the Senator and Congressman are excited about the proposed dress code and are optimistic that other details can be finalized just as soon as they determine which, if any, issues need to be discussed at the debates.
Posted by Greg Finley at 4:31 PM